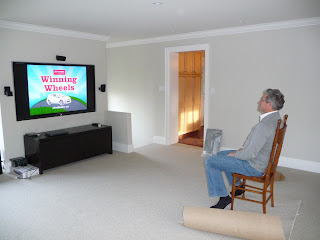 Sunday afternoon – the experts from FutureShop came to set up the television and all of the components.It took these experienced men 2 1/2 hours to get everything up and running. We shudder to think how long it would have taken us to do the same task. We were told our back speakers are too high, but there is nothing we can do about that. The speaker over the tv should have gone underneath it. We followed the schematics – what do the manufacturers know?

We were all excited to have this centerpiece up and running. Philip brought in a kitchen chair and watched in awe. The rest of us sat by the fireplace keeping warm and we still had a great view of the screen. Hearing was no problem with the surround sound.

We have a small problem with the drapery. The speaker on the north window interferes with the curtain rod. The screen on the south window interferes with the curtain rod. The drapery person came out yesterday (Monday) to remeasure everything and to come up with an alternative way of hanging the drapes. They will also have to be shorter now – not that anyone would notice. When remeasuring, she discovered that the south wall is one inch taller than the north wall. Her measurements didn’t show that when she took the measurements in March.

Alvin, the painter, is coming out this afternoon to paint the stairway wall. We didn’t paint the lower half – keeping it the same color as the basement. Our designer mentioned in passing that we might want to paint it. That was on Friday after the painters had finished their work. Alvin dropped by yesterday to hang wallpaper. I asked for his opinion and he agreed. So – he’s coming by this afternoon to paint the wall. We’re getting there.

This will probably be my last renovation post until late Thursday. Little fixits will happen between today and Wednesday. On Thursday, INSTALLATION DAY,  I am to vacate my home while the house is put together. Light fixtures will be installed, furniture will be placed, drapery hung, collectibles will be set out and pictures will be hung. I have made plans to go to Guelph for most of the day. My cellphone will be with me as I await the call that I can come home.

Many pictures will be posted. Better yet, if you’re in the neighborhood, drop in and have a look.